Why I’m traveling with my baby

This post originally appeared on my other site, TheNotoriousMEG.com in December 2011. I’ve reposted it here without edits. 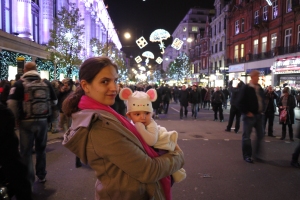 This week, Vera and I came back from a few days in London to see friends and get a little dose of Christmas (it turns out, 3 days of pre-holiday shoppers and relentless Christmas music is plenty). The UK is country #6 for my baby who is not yet five months of age, and I’m already itching to plan another trip. On each flight, a fellow passenger or flight attendant will ask, “Is this her first flight?” and I respond proudly that it’s her 12th and counting.

When I talk to people about traveling with the baby, I’m often met with reactions that indicate I must be insane, reckless, or just selfish. These are all valid points, but so far Vera is a very healthy and happy baby, and I hope to keep traveling as long as she remains so. I’m paranoid about ever being the mother-with-the-crying-baby on a plane so I watch her like a hawk for signs of distress and I’ve been lucky so far to have a nearly perfectly-behaved baby (it helps that all I can really do with her is feed and hold her, which are her favorite activities) on each flight. Occasionally, I doubt my own sanity and decision-making when I’m walking around a foreign city late at night with a crying baby, taking a cross-border bus with no adult help, or trying to  juggle a stroller and a suitcase while nursing and walking, but I have no real regrets.

So, in case you wondered, why the hell am I dragging my baby around the world?

1. It’s just going to get harder. For now, Vera is a pretty portable and self-contained unit. She’s starting to sit up on her own and prefers to be vertical most of the day to see the world, but she’s not yet crawling or walking. Though I bemoan the fact that she hates bottles, exclusively breastfeeding means I can feed her at any time or place without any special equipment or food. She’s not speaking (or talking back) yet, and I can often entertain her with just the reflection in a mirror, the rattle of a matchbox (babies shouldn’t play with matches, of course), or some silly faces. It will be a few years before I need to worry about kids’ menus, an arsenal of toys, or toddler tantrums. The hardest part is carrying her all the time (strollers and carriers are great, but can be bulky or back-breaking at the worst times), finding places to change her (though I’m adept at doing it in the tightest and oddest of places), and figuring out how to appease someone whose only form of communication is crying.

2. It gets her into the habit of traveling. Some children whose parents keep them inside all the time have a hard time adjusting to a world of new people, noise, and crowds, whereas Vera thrives on them since she’s experienced them almost daily since birth. The same goes for planes and new places, and I try to talk to her on each flight about how special it is to be on a plane so she eventually learns about proper plane etiquette and what a privilege it is to be a traveler. At the rate she’s going, I’ve thought about playing the Turkish Airlines theme song as a lullaby and wonder if she’ll recite airport codes before the alphabet.

3. I have the time and opportunity. For over a year now, we’ve lived in the only city in the world on two continents, and I can fly to many destinations in Europe and Asia in a fraction of the time it would take me from the US. Since we’re here for Husband’s job and I’m taking care of the baby full-time, I’m not going to work every day and don’t have to worry about vacation days. I just learned of a deal to Budapest next month for about $200 and a two-hour flight. Even if I were at home with Vera in New York, that fare wouldn’t even get me to Chicago. We went to Slovenia and Italy last month due to a friend in Trieste with a spare bed and a cheap fare into Ljubljana (which is fabulous, by the way). In a few months, I could be back to working 9-to-5 and paying hundreds to fly long-haul on crappy US carriers, so why not take advantage now?

4. It’s easier than being at home. In the time it’s taken me to write this, I’ve had to stop several dozen times to feed and change the baby, walk her around the apartment to figure out which babies in the mirrors are her friend, sing a hundred verses of “Oh my Verushka” (to the tune of “Camptown Races”), make her stuffed moose Lamont dance, rescue her from the bouncy chair when she decides she HATES the rainforest music (me too), and find a position for her on the couch so she can sit up without falling on her head. This is to say nothing of the myriad distractions on the internet, and the fact that I’ve showered, dressed, and eaten something by mid-afternoon is something of an accomplishment. When we are traveling, every day is full of distractions, interactions, and explorations. The baby still needs to be fed and changed frequently, but she is constantly engaged, taking in new information, and often doted upon by friends or random strangers (this is a thing in Istanbul too, no one loves babies like the Turks!) when I need a quick break. Sure, I’m still not able to get to the everyday stuff of making proper meals, writing blog posts, returning emails, and anything else that requires two hands, but it’s a lot more fun.

5. It’s a perfect college essay subject. Okay, I’m being a bit facetious, but I think all this early travel is a great gift I can give my daughter, even if she doesn’t remember it. Thanks to the magic of social media, I have tons of photos, notes, and stories to share with her about the many Turkish boyfriends she made or the time she ended up topless in a Slovenian wine bar (note: always carry a backup outfit). I hope one day she might want to re-visit all of these places as an adult, either with me or on her own. Due to our semi-nomadic expat lifestyle, I may not be able to give her a real nursery, celebrate holidays the way I remember them, or surround her with family, but I can help fill up her passport.

ETA: A round-up of my travel with baby stories for Gadling here.

Babies on a plane: the great debate →

2 thoughts on “Why I’m traveling with my baby”