Before Baby Turns Two: Where to Go? 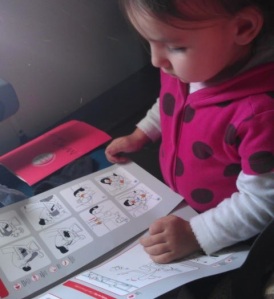 My baby is now 20 months, and somehow it’s nearly spring already! We’ve been very lucky to have had a busy year already with travel, ringing in the new year in Brazil and returning to Istanbul for the first time since we moved in the fall (you can follow our travel in pictures on Instagram). Lots in progress for this blog, as well as a new side project reviewing children’s books for fun. Looking ahead, we are trying to take one last big trip before Vera turns two in July. Not that we won’t travel after she turns two, but as we will start to have to pay full fare (see my Gadling article today on specifics on airfare for a baby celebrating their second birthday before the return trip, I contacted most of the big airlines to get their policies) after her birthday and she’s also getting harder to travel with as she gets older and more mobile, so this might be the last big one for awhile. After all that airline research and thinking about weather and crowds, we decided to simplify and travel in June, in advance of the actual birthday. We may want to actually have a party for her at home or something in July, or do a short trip close to home. So now we are thinking two weeks some time in June (our 9th wedding anniversary is the 6th, so bonus if we are on holiday for that too).

-International destination: If this is the last time we get a “free” (really about 10% of adult fare) ticket, we might as well make the most of it. Hubby would like to go somewhere he hasn’t been before, so this rules out much of Europe except the north, and he’s especially keen on southeast Asia. International routes also have international airlines, which are generally better for flying with infants, and since we aren’t necessarily using frequent flyer miles, we are fairly open to carriers.

-Short or overnight flights: As I’ve emphasized before, timing is everything when flying with a baby. She’s a great traveler who hasn’t had any incidents yet, but getting on a 12-hour-flight during the day is like playing Russian roulette. Overnight flights are easy; the later departure, the better, since she’s still a night owl. If we have no choice but to fly during the day, it’s better if they are four or five hours max. I’d rather spend a few days getting to our final destination, taking breaks between flights, instead of a long direct flight.

-Baby-friendly destination: My concept of baby-friendly isn’t quite the same as family-friendly: I like places where locals love children, don’t mind a toddler running around a restaurant (with my close supervision to not bother other diners, of course), and where it’s not unusual to see little kids out with their parents at night. Istanbul is still hands-down the most welcoming for babies (and we found it like an amusement park for toddlers on our recent trip), and I also found Budapest, Greece, Italy, Seoul, and Brazil to be fabulous with a baby. Really, we haven’t been to a place yet that wasn’t baby-friendly, but have found southern Europe, Latin America, and Asia to be most likely for having waiters who tote your baby around a cafe and old ladies who pinch their cheeks (a good thing, in my opinion) Bonus points for an easy-to-navigate city/transportation system with a stroller, although we managed over a year on the poor streets of Istanbul, and we are using the stroller less and less these days.

With that in mind, we’ve narrowed it down to a few possibilities:

-Scandinavia & Iceland: Smart design, endless days, and gourmet hot dogs? We are tempted by Scandinavia and Iceland, especially Copenhagen (though Vera’s a bit young to appreciate all my Hans Christian Andersen knowledge, I still remember most of the movie’s songs), Stockholm (ditto Pippi Longstocking), and Estonia (can’t explain my fascination, but I hear it’s charming). Helsinki is high on hubby’s list too, and we’ve been keen on Iceland for years. The weather will never be better than in June, and while we may not think 60F degrees warrants a beach trip, there are lots of lovely islands and beaches to explore on the North and Baltic Seas. Thanks to Iceland Air, it’s easy to fly from NYC to any of the northern European countries and stopover in Reykjavik for free. Flights to Iceland are relatively short (six hours from JFK), and another few hours on to Europe, so pretty much ideal for us. They are also much cheaper than to western Europe or Asia, but once we get there, costs are high. I’ve found some good deals on AirBnB rentals (the way to go when traveling with a kid), but meals/drinks/transportation prices are really expensive. The question is: are these places better enjoyed when she’s old enough to appreciate Icelandic elves and trolls, Scandinavian fairy tales, and Danish Legos? Or should we wait and do these places *without* Vera (shudder to think, but there may come a time when we leave her with a grandmother or babysitter), when we can fully enjoy hot springs and vodka? Will the cost of living offset the airfare savings?

-Russia & Iceland: Husband was born in St. Petersburg (actually Leningrad), and though he left when he was about Vera’s age, it holds a big place in his heart. We went to Russia when I was newly-pregnant in December (yes, cold but definitely doable) and saw much of the major sights in Moscow and Peter, but would love to go back with V to see her father’s homeland. We could also be there during white nights and during the 200th anniversary of St. Petersburg, so probably a lot happening. Again, Iceland Air has great deals into St. Petersburg, and on-the-ground costs are higher than other eastern European cities, but not extortionate (cheaper than Scandinavia, especially as we won’t be going to any $1,000 cover night clubs). The big added cost is visas, over $600 for the three of us, which bumps up the ticket price substantially. There is the possibility of getting multiple-entry visas valid for three years for another $40 each, which might be worthwhile if we plan on returning in a few years. While Husband’s fluent Russian will be immensely helpful, I can’t imagine it’s very baby-friendly, and just taking the escalators down into the metro could be a nightmare with a stroller.

-Vietnam: For a decade now, we’ve been hearing from friends how amazing Vietnam is to travel: cheap, friendly, and beautiful. I’d travel there just for the food, we could live like royalty for a small budget, and Vera would be treated like a rock star. The problem is the flights, which can cost a minimum of $1500 each (for adult tickets), not to mention the 20+ hours of travel we’d spend getting there. Vietnam also requires a visa, but fees are a more reasonable $90 each for Americans (a drop in the bucket after you pay for those airline tickets!). After some extensive searches, I’ve found some possibly doable flights on Emirates and Cathay Pacific with late-night departures and long layovers, but they are upwards of $2k each (though both airlines are supposed to be fantastic, even in coach). Still, is it better to do this trip now before we’d have to pay another $2k for her child fare? Does the baby-friendliness of the Vietnamese outweigh the infrastructure issues? Will our great flight luck hold out for that many hours?

We’ve had lots of other ideas like Mexico (always wanted to do the Riviera Maya and Mexico City), Sicily (airfares high), Tel Aviv (too hot?), but we keep coming back to northern Europe and Vietnam. Any advice or recommendations for me? It’s a nice dilemma to have!

12 thoughts on “Before Baby Turns Two: Where to Go?”