Flying with a baby made fun and easy!* Part one: timing 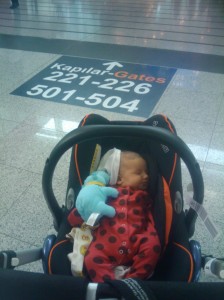 *Okay, so every baby is different and I can’t guarantee that flying with a baby can be fun or easy, but the nightmare of spending hours trapped with a screaming, smelly infant on a flying hunk of tin isn’t an inevitability. With the right attitude and planning, you can survive it, and maybe even make all those nasty online commenters eat their words.

Back in October, having taken a few flights trans-Atlantic, in Europe, and in the US with Vera, I wrote an article for Gadling on tips for flying with a baby. Six months and more than twenty flights later, I stand by my advice, and while it’s getting harder now that she’s closer to one year, she’s still an excellent flier. I’m now often asked by friends nervous about flying with a baby for advice, so here are my lessons learned, starting with the big one: Timing is everything.

Age: Vacation time, holiday obligations, and finances may not always allow you to choose when to travel. But in case you are reading this in the first blush of parenthood wondering how soon you can take the baby to visit family or for a long-overdue vacation abroad, I’ll tell you: go early. Our first flight with her to Malta at six weeks wasn’t much harder than traveling with a full-size pillow (what is it with those people?!), as she slept through most of it. Most parents will tell you that the first six months is the easiest time to travel, and I’d say 2-5 months is the sweet spot. At that age, you feel semi-competent as a parent, your baby isn’t all floppy neck, and they develop a little personality but aren’t mobile or talking yet, and will still sleep for long stretches during the day. Up until they start walking, it’s still relatively easy, but your child may want to constantly practice their new sitting/standing/crawling skills, and that constant babbling won’t seem so adorable to the rest of the plane.

V developed an unfortunate habit of random, high-pitched shrieking for no apparent reason around 8-9 months. She wasn’t upset, and there was nothing we could do to stop or prevent it, but it was mortifying. I vowed not to fly until this phase had passed (and felt fortunate to live in Istanbul where people think it’s cute), and once she learned to make some new sounds, the shrieking more or less stopped by month ten. Moral of the story is that this too shall pass, and you may want to put off travel if your baby is at a challenging age. Of course, you can’t predict the future, but if you wait 2-3 months from the onset of the difficult behavior, it will have passed or you’ll have learned how to cope.

Before our first flight at 6 weeks to Malta. Fortunately, she didn’t cry at all *on* the plane.

Choosing flights: Once your baby is a few months old, even if you don’t have a set routine or schedule, you will notice patterns in their behavior. Certain times of day are easier than others. For V, she has a college student-like schedule: stays up late, sleeps most of the morning, and naps a few times; but around early evening, what we call “the witching hour” arrives, and she can be difficult to pacify. If your baby has a particularly fussy time of day, avoid flights at that time. It’s really not worth saving a few bucks on short flights, and if they are fussy at home, it’ll be much worse on a plane.

International flights might not give you an option of departure times, but they are generally overnight, which can be easier. Whether your baby sleeps through the night or wakes up hourly to feed, at least you won’t have 10 hours of playtime to fill (and if you are waking up all night, you’re used to the sleep deprivation). Dress the baby in pajamas (breathable cotton is best) to make it feel more like bedtime. Long flights are also easier because the planes and seats are larger, they have more distractions/amenities (an in-seat TV screen and a free drink with dinner for you can be sanity-saving), and there’s less chance of being grounded for long periods due to bad weather when your arrival airport is across an ocean.

Our most difficult flight to date was thankfully the shortest: a quick hop from Boston to New York, which I stupidly booked at 5:00pm (witching hour and awful airport traffic!). I was by myself, the plane was packed, and I was already stressed from rushing through the airport and getting only stony stares when I needed help (C’mon Boston, you’re my hometown! Be nice!). We made it through without any big incident, but only after I’d made myself into a sweaty, nervous wreck jostling the baby so she wouldn’t cry for more than a half-second when she fussed. If I could do it over again, I’d have stayed the night in Boston, and flown early the next day while V slept.

This brings me to my other point: if you have a mix of (US) domestic and international flights, book the overseas flight on a foreign carrier and make connecting flights abroad. Foreign airlines aren’t always better, but they are more likely to be government-subsidized, and thus, better planes, fewer fees, and more services. Anecdotally, I’ve also had far more European flights with empty seats next to me than in America. Let’s say I’m flying from Chicago to Istanbul (there is a direct flight on Turkish Airlines, but it tends to be significantly more expensive than non-directs). I’d rather fly Lufthansa to Germany departing late at night and then take a short Europe flight while the baby (and the rest of us) is still sleepy, rather than deal with busy airport connections and the TSA while she’s awake and active. If I don’t have the option of flying direct to Europe, I’d rather fly to New York in the morning and spend the day in the airport tiring the baby out between flights (might even be worth buying lounge access or venturing into the city depending on your situation).

Believe it or not, this is just the beginning of our advice on flying with an infant. To be continued…

← Baby-friendly places: nobody beats the Turks
Flying with a baby made fun and easy!* Part two: Be prepared →

5 thoughts on “Flying with a baby made fun and easy!* Part one: timing”